…or do ballet, apparently. Clearly, I missed that memo.

Two years ago, when G1 wanted to do jewellery making as an co-curricular activity, I remember feeling apprehensive. Back then, my concern was not that he had chosen an activity more often associated with girls, but that he might be made fun of. It turned out that jewellery making was a far more acceptable activity for boys today than it had been when I was growing up. He was not teased, nor was he the only boy who signed up. I had worried for nothing.

So when G2 demonstrated a natural proclivity for dancing, I thought to encourage him further with dance classes. For his age level, there was only one dance class that he could do – a creative dance class which was really ballet. A boy doing ballet – surely that couldn’t be a problem in this day and age? What could possibly be more masculine than the ability to lift a woman over your head and make it look effortless? Just take a look at the following core workout for a male ballet dancer!

So I didn’t think twice about it, but perhaps I should have.

Although we have made significant progress in breaking down the gender barriers of what is acceptable for boys and girls to do, it is clear that we still have quite a ways to go.

About a year or two ago, I was looking for pink t-shirts for the boys to wear to school on “Pink Day” – a school initiative in support of breast cancer awareness and fundraising. Although there was plenty of pink in the Men’s department, there was not a single pink item for a boy to wear. It seems that if you’re male, you can only wear pink after you reach a certain age. Desperate, I tried the girl’s department but all the pink t-shirts were covered in ribbons and lace.

That was a couple of years back and we seem to be making progress because you can now buy pink shirts for boys on Amazon: 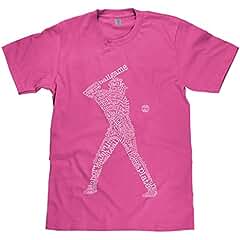 As for boys doing ballet – I have also discovered a few sites for inspiration:

Unfortunately, it may be too late for my boy. It also doesn’t mean that the teasing will stop. And for a sensitive boy, that could be the nail in the coffin.

As a child that grew up being excluded from games because of my gender, I am bothered by the gender divide. Ordinarily, when we think of the gender divide, we usually think of how it impacts our girls even though it also affects our boys.

They say that “sticks and stones may break my bones but words will never hurt me.” Well, I disagree. Words are powerful and they do hurt, especially when you’re a child without a fully developed pre-frontal cortex to rationalise it all. It shouldn’t be right that a boy who wants to wear pink and dance on his toes must endure the taunts to earn the right to do as he pleases.