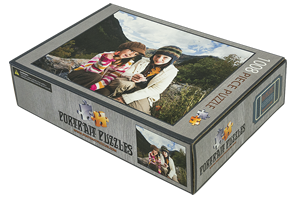 Portrait Puzzles – Order By 10 AM CST on December 16 & We Guarantee Delivery by Christmas or receive DOUBLE Your Money Back.

There are a lot of activities that we engage in that we assumed to be beneficial to our cognitive development without really questioning that assumption. One of these activities is working on jigsaw puzzles…

The Benefits of Solving Jigsaw Puzzles

A number of the articles that I have found on this subject list the following as some of the various benefits of completing jigsaw puzzles:

According to the “brain fitness tips from Posit Science“, the jigsaw puzzle must be complex enough to be challenging for you – that is, no fewer than 500 pieces (obviously more if 500 is too easy for you).

Many of these explanations sound logical, but none of the articles link to the science supporting it. I’m not saying that there is no science to support it – just that I haven’t been able to find studies that specifically link jigsaw puzzles (as opposed to brain games, general puzzles, etc.) to the brain benefits claimed. I’d love to be proven wrong because I really do enjoy a good jigsaw puzzle and it would be nice to be able to say that there are real cognitive benefits to be realised from doing it.

The best I could find were the following…

We tested whether mental rotation training improved math performance in 6- to 8-year-olds. Children were pretested on a range of number and math skills. Then one group received a single session of mental rotation training using an object completion task that had previously improved spatial ability in children this age. The remaining children completed crossword puzzles instead. Children’s posttest scores revealed that those in the spatial training group improved significantly on calculation problems. In contrast, children in the control group did not improve on any math tasks. Further analyses revealed that the spatial training group’s improvement was largely due to better performance on missing term problems (e.g., 4 + ____ = 11).

So can we extrapolate this to mean that jigsaw puzzles can improve a child’s mathematical ability?

The health and social benefits of puzzle playing stretch across a lifetime – cognitive therapy with puzzles can help improve memory and enhance openness and social interactions in the elderly, and lifelong puzzle work is more beneficial than work done in the later years only.

Jigsaw puzzles help engage the brain and encourage the retention of information about shapes and colors. This information then helps the brain choose pieces that fit together. The hunt for pieces requires your brain to memorize what pieces look like, along with remembering what kind of pieces you are searching for, in order to complete the picture. Doing this repeatedly reinforces short-term memory – Do Jigsaw Puzzles Help the Brain?

In the quest to understand more about the benefits of solving jigsaw puzzles, I came across numerous references to an elusive “McArthur Study” that appears to be rather illusive. The references to the study suggest that individuals who have actively engaged in jigsaw puzzles, cross words, and physical activity were more likely to have a longer life span and a reduced chance of developing Alzheimer’s, memory loss, dementia and other old age problems. Unfortunately, I did not find any reference to jigsaw puzzles in the study.

There was only one reference about the MacArthur study in connection to jigsaw puzzles. It was in relation to the cultivation of social support:

“The MacArthur researchers described a study in a nursing home in which residents were asked to do a simple jigsaw puzzle. During a practice session, one group was given verbal encouragement by one of the experimenters as they practiced doing the jigsaw puzzle. The second group was told how to do the jigsaw puzzle. The third group got no social support or how-to advice. Later, when they took a test in which they did a puzzle on their own, those in the group given encouragement did better than they had during the practice session. The people who had been told what to do had more trouble during the test than they’d had in the practice session. And those who had received neither encouragement nor advice did neither better nor worse.” – Harvard Health Publications

The subjects in the MacArthur study were mentally active in a variety of hobbies. There was no mention of jigsaw puzzles although it could have been implied:

They remained mentally active. These are the people who, rather than parking in front of the TV, did the crossword puzzle every morning, browsed the library shelves regularly for new and interesting books, dabbled in hobbies and crafts, or played bridge three times per week. – Memory Loss and the Brain

Jigsaw puzzles are good for your short term memory and visual-spatial ability. I had hoped to find something more compelling for such an age-old passtime – especially one that I enjoy so much. That’s not to say that they don’t offer your brain other benefits. The dearth of research on jigsaw puzzles as a beneficial activity just means that nobody’s really that interested to test it out.

2 thoughts on “What are the Brain Benefits of Jigsaw Puzzles?”