One afternoon, G2 was sitting down to do some Math homework. He seemed to be struggling with it, so I sat down with him to help him out. As we worked on it together, I also noticed he was yawning a lot and his eyes had a glazed over look to them. Realising the pointlessness of pressing on, I stopped him and we did some jogging on the spot and star jumps. The intention was to give him a quick brain break to get his attention back online. When we settled back down, he seemed a little more focused and was able to finish the rest of his Math homework.

Uncertain as to whether he had grasped the concepts from his Math homework, I decided to give him more problems the next day. Expecting him to run into trouble, I sat with him ready to assist as he worked through the problems. To my surprise, he zipped through them all without a hitch.

So what worked for him?

I don’t know. But these are the things that science says will help with learning and so we use them.

In retrospect, we should have done some resistance training as well, since it has been shown to improve long-term memory by 20% (Weinberg et al., 2014). And if you’re wondering what is resistance training, it is any exercise that increases strength, tone, mass, and/or endurance in the muscles. It involves the contraction of the muscles against an external resistance, such as body weight, gravity, resistance bands, or weights.

But wait, isn’t strength training bad for young kids? According to a review from the British Journal of Sports Medicine:

Current research indicates that resistance training can be a safe, effective and worthwhile activity for children and adolescents provided that qualified professionals supervise all training sessions and provide age-appropriate instruction on proper lifting procedures and safe training guidelines.

Mayo Clinic suggests that kids can start strength training as early as 7-8 years old. For our purposes, simple resistance training exercises, such as squat thrusts (burpees), push-ups, and knee bends (or squats) are sufficient.

Attention Deficits and the ADHD Brain

Attention deficits and ADHD are topics that come up from time to time because I have a child who is very active and quite inattentive at times. While that alone is hardly a diagnosis for ADHD, it has prompted me to look deeper into this often misunderstood condition.

Probably one of the biggest contentions, even among the medical profession, is whether ADHD is a real condition. Part of the problem lies in the fact that diagnosis is tricky and the signs and symptoms are ambiguous. A multitude of factors can lead to a misdiagnosis. That is why it is essential for us to gain a better understanding.

Is ADHD a trumped up medical condition? The recent study from the Lancet, published earlier this year, answers that question with resounding “no”. Imaging scans have revealed that there are structural differences in the ADHD brain compared to regular brains:

The study is the largest to look at the brain volumes of people with ADHD, involving more than 3,200 people. Researchers identified differences in five regions of the brain, with greatest differences seen in children rather than adults.

Not only are there structural abnormalities, but there are also functional differences and alterations in the brain’s chemical messengers:

One of the best strategies for managing ADHD involves establishing an extremely rigid structure. This can be achieved through activities like martial arts, ballet, figure skating, gymnastics, rock climbing, mountain biking, whitewater rafting, and skateboarding.

ADHD boys age eight to eleven participating in martial arts twice a week improved their behavior and performance on a number of measures compared to those on a typical aerobic exercise program (both kinds of exercise led to dramatic improvement over nonactive controls). The kids involved in martial arts finished more of their homework, were better prepared for class, improved their grades, broke fewer rules, and jumped out of their seats less often. In short, they were better able to stay on task. – Spark: The Revolutionary New Science of Exercise and the Brain

What’s the link between all of these activities? They activate many brain areas, such as those responsible for balance, timing, sequencing, evaluating consequences, switching, error correction, fine motor adjustments, and inhibition. More importantly, they also require intense focus and concentration. The adrenaline rush created by these activities taps into fight or flight response. This is pretty powerful for helping us to focus. Additionally, the aerobic nature of these activities also boosts cognitive function, facilitating the learning of new moves and strategies.

In his book Spark, John Ratey writes about high-functioning professionals who had ADHD and were able to compensate for it by using exercise as a form of medication. Exercise helps because it boosts levels of dopamine and norepinephrine – which is what ADHD drugs do. Dopamine and norepinephrine are two chemical messengers that play an important role in regulating the attention system.

The Age of Distraction and Inattention

Whether or not ADHD is a problem our children face, there is no denying that we live in an age of distraction. It’s hard enough to stay on track as adults without ADHD when stimuli from a myriad of sources bombards our every sense. If exercise can boost attention in individuals with ADHD, surely it can help us manage any attention deficits we are prone to from time to time. I think it is safe to say that we can all benefit from physical activity that will help us to strengthen us our focus and attention.

I hate to be the bearer of bad news, but the 30 minutes 2 to 3 times a week I mentioned in an earlier post is just the minimum. The ideal target, according to Spark is 45 to 60 minutes, 6 days a week. It should be a mix of moderate and high intensity, and include some form of resistance training.

“The best, however, based on everything I’ve read and seen, would be to do some form of aerobic activity six days a week, for forty-five minutes to an hour. Four of those days should be on the longer side, at moderate-intensity, and two on the shorter side, at high-intensity…

…on the shorter, high-intensity days, include some form of strength or resistance training. These days should not be back to back; your body and brain need recovery time to grow after high-intensity days.” – Spark: The Revolutionary New Science of Exercise and the Brain

If that sounded a little too much, then just remember this: the goal is physical fitness. Anything you do that gets you closer to that state is good – even walking. 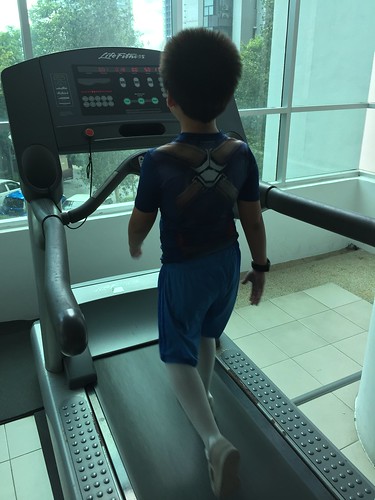 What We’re Up To

After reading Spark, I’ve decided it was time to up the ante on the boys’ physical activity regime. For complex movements, we’re working on Judo, basketball, ice skating, and anything on wheels. To build up their cardio fitness, we started “running” in the gym and at the track. The goal is 30 minutes, 3 times a week. Yes, I know, it’s baby steps, but like Dr Ratey says, the important thing is just to get started. We’re also tracking heart rates with the GEONAUTE ONrhythm that we picked up from Decathlon so the boys know when it’s time to step up the intensity. 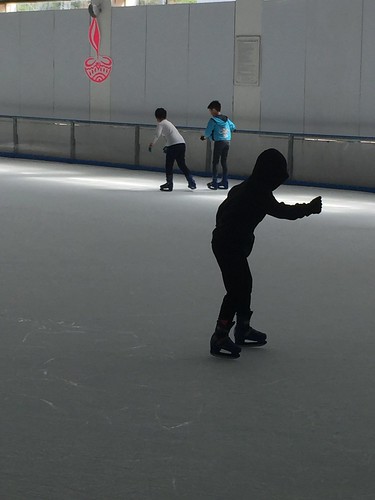 Recently, we shifted over to the cross-trainer on a friend’s suggestion. To my surprise, the boys worked harder than they have ever done on the treadmill or on the track. Both boys covered a full kilometer more than they usually do in 30 minutes! We didn’t even get the usual complaints of sore legs or stomach stitches! Was it was the novelty of using a new machine? Maybe it was because the cross-trainer reminded them of the Mechs they saw in the new Ninjago movie. They played an imaginary game of “destroy the monsters” and 30 minutes of cardio training zoomed by.

Eric Barker has it right – sometimes you just have to make a game of it. 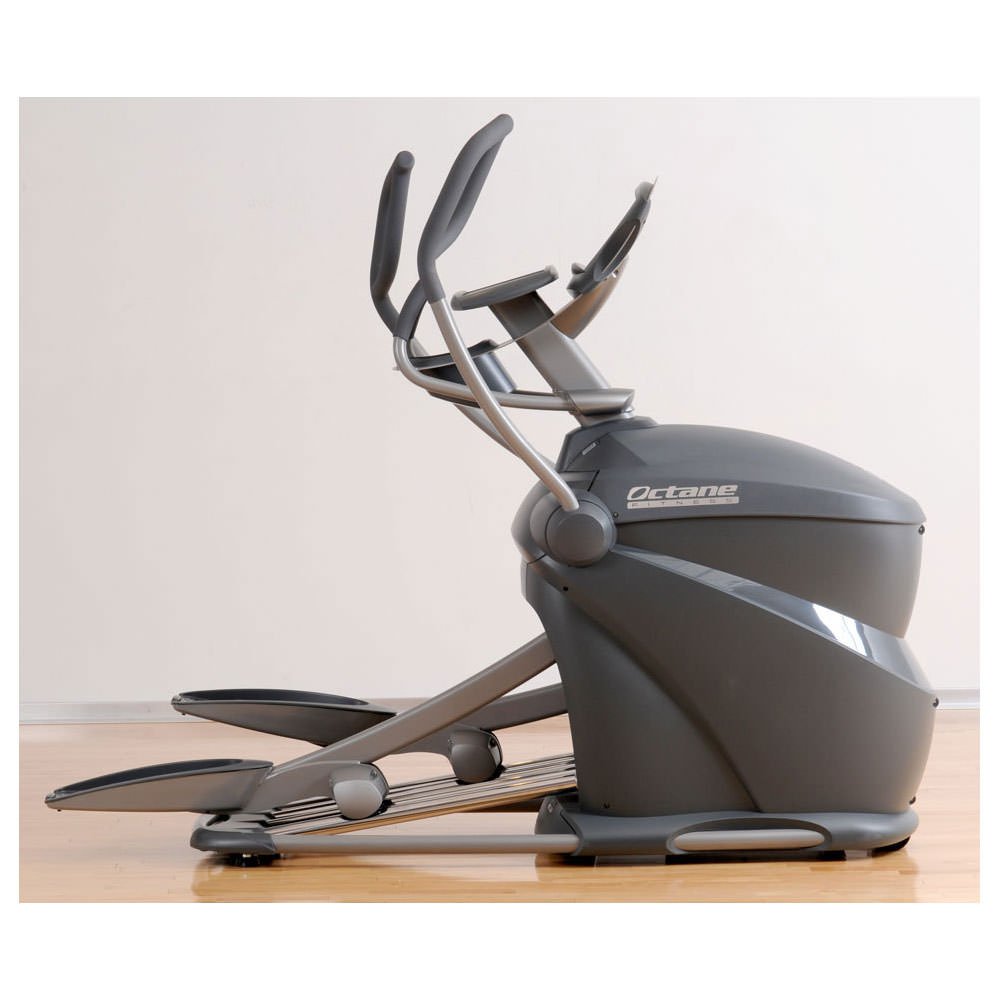 Disclaimer: Please be aware that the information posted here is the interpretation of the author. It should not to be taken as medical advice. It is not intended to replace consultation with a qualified medical professional.