Breaking out of your comfort zone is never easy. It is especially challenging when you get too comfortable in your niche. Such was the case when we tried to encourage G2 to use the two-wheeled scooter instead of his old three-wheeler. He adamantly refused to try the two-wheeler until his Glider XL met with an untimely accident. G2 had left it lying around carelessly and DH backed up over it as he was reversing the car. A 5000 pound car versus a child’s scooter – well, we all know which vehicle won that one.

As upset as we all were about the accident and the broken scooter, it turned out there was a silver lining to be had. Forced between the prospect of being scooter-less or learning to ride the two-wheeler, he chose the latter. He was rather cautious and a trifle unsteady to begin with, but I have noticed that his balance has improved tremendously. I would even go as far as to say that he is now as proficient on the two-wheeled scooter as he was when he was on three wheels.

Clearly, I should have gotten rid of that old scooter sooner. Ah, but I will miss it. We had some good memories with the Glider XL: 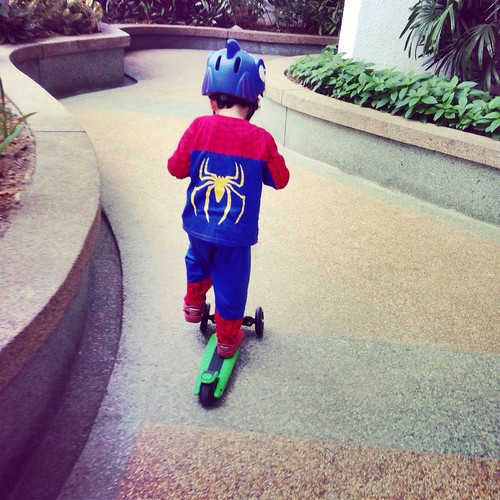 Learning to Ride a Bike

Learning to ride a bike was a little trickier because G2 wasn’t quite as motivated to get on that one. As long as he had training wheels, he was more than happy to go biking. Then another unfortunate accident befell one of the training wheels. The boys were out riding when this happened (don’t ask me how): 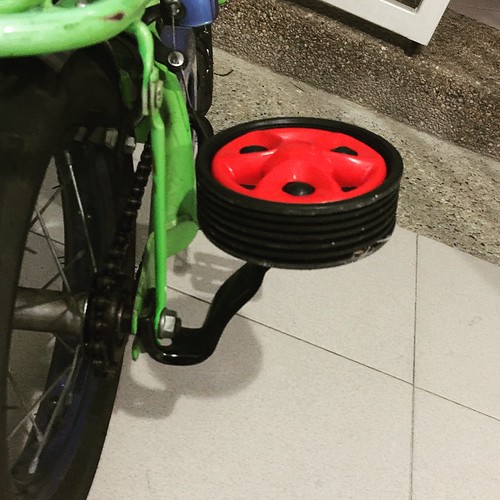 Without the stabilisers, biking became a chore. G2 had no desire to develop the balance required to ride on two wheels. We made very little progress for the longest time until one Sunday when DH brought his unwilling protege down to the carpark. And just like that, he was off!

It is amazing how quickly things are learned sometimes. The moment we go from “not being able” to “being able” can happen so quickly that we miss it if we blink. It felt exactly the same when I was learning to ride a bike. I cannot remember what age I was but I must have been about 10. My cousin was visiting for the holidays. She and her Mum had been invited to go somewhere and I desperately wanted her to stay with me. I blurted out that I would try learn to ride the bike and she agreed to stay.

The funny thing was that I wasn’t even serious about learning. I remember thinking that I would make all the pretense of trying but I didn’t really care whether or not I succeeded. I made many unsuccessful attempts where I would put my feet down before the bike got anywhere. On one of those attempts, I kept my feet off the ground for longer than usual and suddenly I was riding. I was so surprised that I crashed into a tree. After that, I couldn’t stay off the bike.

I guess I’d always had this idea that learning to ride a bike was going to really difficult. My brother learned several years before me under the guidance of other cousins. There were many an afternoon when they would come back from the park bearing injuries from falling off the bike and our grandfather would be tasked to patch them up. Perhaps that was why I was always so reluctant to learn myself.

From Two Wheels to Eight

G1 learned to rollerblade some years back when we were trying out new activities. He never became proficient at it but he did get the hang of it sufficiently to move around the rink. Since he wasn’t particularly keen and at RM50 a lesson (not including rollerblading entry fees), I didn’t insist that he continue.

Then the boys were inviting to a rollerblading party and I knew I had to do something. I saw that Decathlon was offering free lessons at their store so I took the boys along for a whirl. This time, G2 got to try it as well. Of all three of the sports on wheels – scootering, biking, and rollerblading – I think rollerblading is the hardest (in my opinion, anyway). 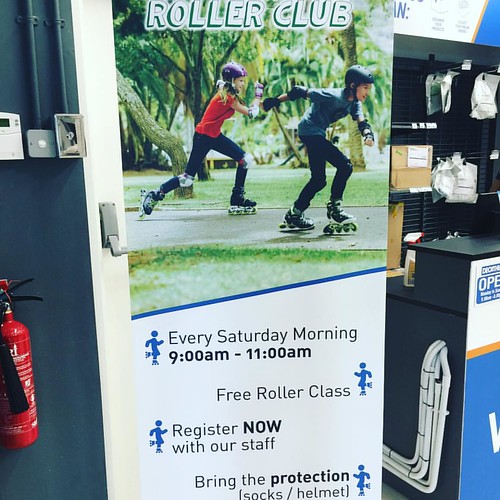 The boys are still a long way off from rollerblading proficiency, but Mama the drill sargeant is rather pleased with her efforts to get the boys more active. G1, particularly, has been most impressive with his perseverance. Sports have never really been his thing but his enduring persistence to get better at it has done me proud.

Just like learning to play basketball, the art of balancing on wheels requires significant motor coordination and brain work while you’re still figuring it out. Therefore, learning to ride a bike, to scooter, and rollerblade are some tricky mental exercises for kids. Of course, once they learn the skills, they’re with them for life and they will have something that’s both fun and healthy to do. Not a bad thing to have under your belt in this day and age of indoor slothfulness.