I was never very good at sports growing up. You know how people talk about Math as a subject they just don’t have an aptitude for? Well, that’s exactly how I felt about sports. As an Asian girl growing up in Australia – the country where kids are born knowing how to throw a ball – Physical Education was my worst nightmare. They called me Miss Butterfingers – don’t throw anything at me because I can’t catch. My hand-eye coordination was non-existent.

In Primary School, we used to play rounders; it was a game similar to baseball but they used a tennis ball and the bat had a flat surface like a cricket bat. The teachers would pick two captains to form teams; the captains would take turns picking kids to go on their team and I would always be the last person selected. That was because I was a liability to the team – that extra person you really didn’t want because she had no added value and possibly even detracted value from the team.

The teachers tried to even the odds stacked against me by helping me to bat. If I so much as connected the bat with the ball, the other team had to play nice and not catch me out so I could at least make it to first base. After that, it was no-holds barred and it was up to the rest of my team mates to help me get home by hitting the ball really far away. When it was my team’s turn to field, the captain would always send a fielder to stand one meter away from me to catch any ball that came near me.

When we played netball, I would always be assigned to play “Wing Defense”. If you know anything about netball, that is the place where you put your weakest player if you absolutely have to use her at all. Ideally, the bench is where you keep the weak players but since they were short on team members, I got a chance to run around for a bit and maybe touch the ball on occasion.

The solo sports were no better. We used to have to do a 2.7km “cross-country” run and it would take me 30 minutes to complete it. And don’t even get me started on the fitness tests.

One year, my brother developed an intense fascination for cricket. Over the Summer holidays, he would bribe me to play backyard cricket with him almost every day. Well, practice may not make perfect, but it certain makes you better. When I came back to the school the following year, I did so well batting at indoor cricket that several jaws dropped. Okay, it was good compared to what I normally do which meant I was average for a change.

I didn’t really get anywhere with sports until I graduated and started working. Then I discovered running for *gasp* fun! I even started hiking and rock climbing. Without the pressure of having to perform or the scrutiny of my peers, I found that I actually enjoyed sports.

There was another reason that motivated me. I’d read a short bio on Frank Herbert (author of the epic Sci-Fi series – Dune) and marvelled at all the adventurous things he’d done. I figured that if I ever wanted to be a writer of an adventure series, I was going to have to start having some of my own adventures. I mean, you can’t really write about stuff you don’t know anything about, right?

Then I had the boys and I decided they weren’t going to suffer their mother’s physical incompetence. I would encourage them to get active from an early age and hopefully, they would develop their skills sufficiently to get good enough to enjoy sports rather than dreading them the way I did.

G1 had his first basketball experience one summer when I signed him up for basketball camp. It went well enough because he went on to do two terms of basketball at school after that. Except that he was the basketball equivalent of my “wing defense” in netball. Being new to the sport, he wasn’t very good. When you’re on a team with competitive players who want to win, you don’t exactly get much time with the ball. Even if you do get the ball, you’re so nervous with it that you treat it like a hot potato.

And just like that – G1’s great basketball experience was over before it could even take off. That is, until we found an awesome basketball coach to step in and give some small group lessons. The extra attention from the coach has really made a huge impact on G1’s improvement in the game. He may not be a Yao Ming in the making, but at least he won’t feel like a sore thumb when he joins a game of basketball at school. 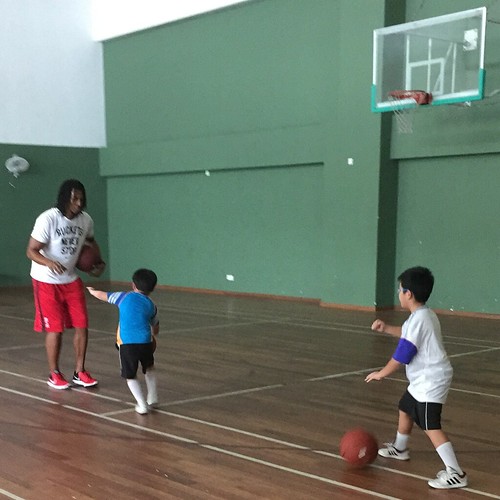 Because I need a reason for everything…

Aside from the benefits of sports from a health and fitness perspective, it is also a good workout for the brain. In fact, physical activity is one of the best things you can do for your brain. Even better than just any regular form of exercise that gets you moving are the sports that require thinking in addition to the movement. That means team sports like basketball, netball, baseball, soccer, or sports that require complex movements, like tennis, golf, rock climbing, or yoga offer a better workout for the brain than sports with repetitive movements, such as running or swimming. The need to think about the movements – coordination, execution, and balance – means that the brain has to be engaged. Sports that utilise repetitive movements allow the brain to run on autopilot.

One way to increase the complexity of repetitive sports, like running, is to run an obstacle course or to run on uneven terrain, like a hash run. Even though biking and swimming are fairly repetitive movements, they can be quite a mental workout for children who are still learning how to swim or ride a bike. The learning process for coordinating movement is a challenging one that does not taper off until the children have mastered a level of proficiency to perform the movements automatically. It is a little like learning how to drive a car – new drivers need to devote more mental resources to the act of driving compared to experienced drivers.

Last, but not least, sports like basketball are great for developing executive functions which we know are important for helping children to succeed in life.