I was invited to join a panel discussion on the following topic at ZooMoo’s Big Day Out at the opening of the new The Parenthood branch in Sunway Pyramid. In the era of technology where tablets and smart phones have invaded every corner of our lives, this topic is a very pertinent one for every family struggling to maintain the balance. So here are some of the highlights from our discussion and a few more points I wanted to add.

“Has the Digital Era Taken My Child Hostage?” 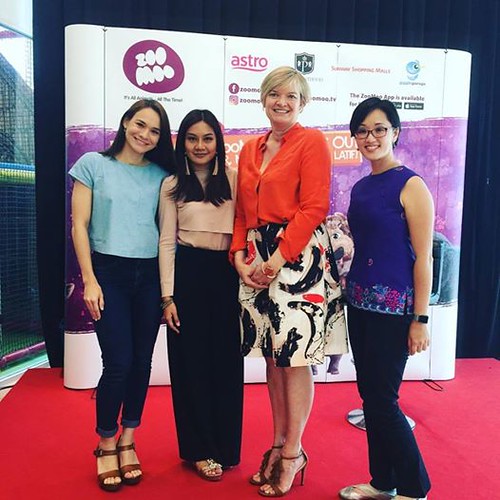 When I was a child growing up, I remember hearing about Bill Gate’s dream of having a computer on every desk in every home. That dream has become reality and it has been surpassed. Computers are not only on desks in homes, they’re in our hands, everywhere we go. Laptops, tablets and smart phones have made computers so portable that we feel naked leaving home without them. The digital era has truly arrived.

As wondrous as the digital era is, it is also a time of confusion and fear for parents all over. Our children are the first generation that will be growing up in a world that is so connected by technology that they never ever have to unplug. But is that a good thing or a bad thing? The debate continues to rage.

Life is full of shades of grey and there is never a clear answer to anything. Technology can be great:

But there are negatives to it as well:

Clearly, we need to strike a balance. Here are a few points to keep in mind:

Technology is a Tool

Like any tool, technology is neither good or bad on its own. It all boils down to how we use it. We can use it well or we can use it poorly and that will determine the effects or consequences. While children can learn a lot through the games that they play on a tablet, it does not help them practice other essential life skills, like making friends. Young children who are busy swiping fingers on a screen aren’t strengthening fine motor skills with activities like play doh, or building large muscles by running around the park.

With all things in life, there must be moderation.

There used to be a recommendation for “no screen time for children under two“. I’m sure that caused a lot of angst because most of us smashed that rule to smithereens anyway. Screen time for our children became that dirty secret no parent wanted to admit to even though many of us were doing it. Even if we admitted to it, it was always with a defensive tone.

The problem with setting guidelines on screen time is that there are no precedents to follow. We grew up as children with limits enforced by our environment rather than our parents. There was no such thing as 24-hour children’s television so we simply turned off the television when there was nothing else we wanted to watch. Most of us didn’t have computers until we were much older, let alone a computer we could carry around with us. The closest thing we had to a portable computer was Nintendo’s Game and Watch. It contained only a single game and we didn’t have one until we were well out of early childhood.

Any guidelines that have been set are arbitrary at best. We don’t have enough data to state at this point just how much media consumption is excessive or what those effects would be. Even the AAP has had to amend its guidelines along the way. They no longer recommend “no screen time for children under two“, instead they recommend:

I think Aishah Sinclair said it best with her analogy of kids playing outside so I’m just going to paraphrase it. When we let our children to play outside, we don’t just send them out and close the front door without any idea of what they’re doing outside. We set boundaries and limits – “this is where you’re allowed to play and this is when you have to come home”. Similarly, when we allow our children tech time, we need to establish what they’re allowed to do – “you can play these games but not those”.

It is important to monitor the media that our children have access to. Is the content appropriate for a child of this age? This is a pertinent question not only for technology, but also books. There are resources and websites that help parents decide what is appropriate and what is not.

One of the ways to monitor media diet is through parent engagement but more about that later.

Regardless of how educational your child’s screen time is, it is also important to have tech-free time to develop other skills. Young children, especially, need opportunities for unstructured play time. They need opportunities to build motor skills – whether it is the fine motor skills for writing, or the large muscles for running, climbing and balancing.

While it is great that we can now make friends online, our children also need to learn to make friends face to face. There is an art to reading body language and discerning emotions through vocal inflections. These are skills you cannot learn in front of a screen.

One way to limit screen time is to establish tech-free zones. Some families make it a rule to unplug at the dinner table. Remember that no tech at the dinner table also means no smart phones for the adults. I particularly like this practice because I’m old-school. I still remember a time when taking phone calls during a meal was considered poor etiquette and you would apologise for it. These days, it’s common practice to check social media updates at meal times and no one bats an eye.

Another practice is to establish is the rule of no tech in bedrooms. Rather than let your teenagers use their phones for a morning wake up call, buy them a proper alarm clock. Make it a requirement to charge phones in the hall or anywhere convenient as long as it is not in your child’s room. This discourages your child from using tech at night when they should be sleeping.

In addition to establishing tech-free zones, you can also try going screen-free for a period of time. We set arbitrary screen-free detoxes which has revealed some interesting effects.

Being a Role Model

You know the drill – monkey see, monkey do. If you want your kids to put those devices away, you need to lead by example because children will do what you do, not what you say. As incredibly painful as that sounds, just remember that it’s good for you to unplug, too.

I think the biggest problem with tech-time is the temptation to use it as a babysitter. I’m not saying that you can’t ever leave your child alone with technology but it is important to be aware of what they are watching and what they are playing. Parents are encouraged to practice co-viewing especially with young children so they can discuss with their children what they have seen.

Tech time is not unlike any other aspect of a child’s life. Just as you would read, go swimming, or play at the park with your child from time to time, you should also watch their TV programs with them and join in when they play games on their tablets. When you’re aware of the shows they watch and the games they play, you can talk intelligently about the topics that are closest to their hearts. This is no different to any other parent-child bonding time.

Parent engagement is powerful. It tells children that this is important to you. You care about what they’re watching and what they’re playing.

There is always a concern that our children are squandering their time on meaningless programs. As much as we want them to only do meaningful and educational stuff with their tech time, it can be incredibly difficult to draw the line between what is and isn’t educational.

Take Minecraft for example, it was designed with no educational purpose in mind. It was just supposed to be a game that was fun to play. Then teachers found a way to use Minecraft to teach coding, math, music, science, English, and a whole host of other subjects. Now you can even learn organic chemistry, circuits, and quantum physics with Minecraft!

Even though it can be difficult to determine the educational value in the activities that our children are engaging in, rest assured that they can learn from a lot more than what we deem to be educational.

Zoo Moo’s Big Day Out in the News