Wings of Fire was recommended to us by a mother of another avid reader. Unfortunately, the books were not available at our library or in the bookstores locally, so we shelved this one for a bit while G1 dug into other stories that had caught his attention. When I discovered that The Dragonet Prophecy (Book 1 of Wings of Fire) was available on Tales2Go, we started listening to it in the car.

Wings of Fire by Tui Sutherland 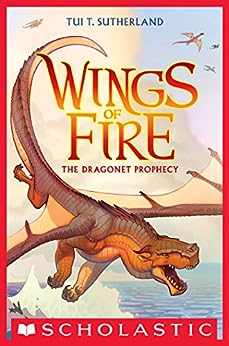 Wings of Fire by Tui Sutherland is a story told from the point of view of a dragon. In Book 1 – The Dragonet Prophecy, the dragon who tells the story is Clay. It is set in the land of Pyrrhia where seven dragon tribes live:

A great war has been raging in the land of Pyrrhia for many years but a prophecy speaks of 5 dragonets that will end it. Wings of Fire tells the tale of these dragonets:

Stolen from their homes as eggs, the dragonets have been raised in hiding under the watchful eyes of three dragons from a rebel group of dragons called The Talons of Peace. Never having met any other dragons except themselves and their minders, the dragonets long to escape the cave dwelling that they have never been allowed to leave since they were born. When they finally succeed, they get a lot more than they bargained for as they run headlong into Scarlet, the queen of the Skywings, and her gladiator-like arena where dragons are required to battle to the death.

The seven dragon tribes have been at war for generations, locked in an endless battle over an ancient, lost treasure. A secret movement called the Talons of Peace is determined to bring an end to the fighting, with the help of a prophecy — a foretelling that calls for great sacrifice.

Five dragonets are collected to fulfill the prophecy, raised in a hidden cave and enlisted, against their will, to end the terrible war.

But not every dragonet wants a destiny. And when the select five escape their underground captors to look for their original homes, what has been unleashed on the dragon world may be far more than the revolutionary planners intended.

There is no Commonsense Media review on it so I’ll try to give a little insight on what I’ve picked up. Wings of Fire is recommended for children age 8 to 12.

Wings of Fire is a very cleverly thought out series of books that I enjoyed reading even as an adult. The examples given above are only a handful of the many positive messages the books convey. The dragon characters are easy to identify with because they share the same worries and fears that we all have. Even though they are the dragonets of destiny, they aren’t perfect, each one having their own insecurities and flaws.

Things Parents can Talk About

The first five books are about the Dragonet Prophecy and each book is told from the point of view of each of the dragonets in the prophecy. Each book allows us to see the different perspectives of each dragonet – their fears, their motivations and their individual strengths and weaknesses and how they compliment each other.

We can discuss responsibility and the power of choice – for example, choosing to do what is right rather than what is easiest; choosing to make our own destiny rather than allowing ourselves to be dictated by a false belief; what’s right or wrong depends on whose perspective you’re looking from. The Wings of Fire series offers some meaty topics for philosophical discussions.

Other Books in the Series: 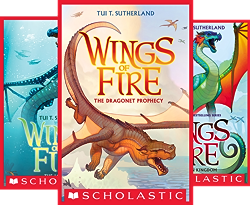