There’s planning and then there’s doing – which doesn’t always turn out the way you plan – at least, not always. Probably the biggest take-home message is this: whenever possible, book everything in advance if you want to avoid the wait and missing out entirely. So here’s how our week in Hawaii really went down and what we learned from it… 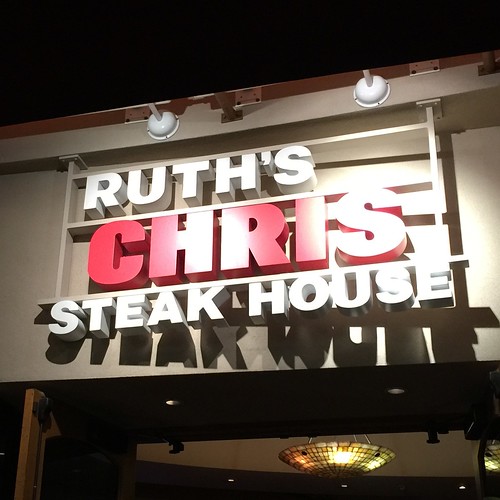 The Japanese Food Court in Ala Moana 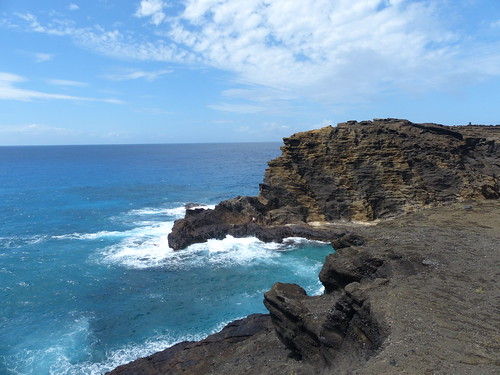 We stopped by Halona Blow Hole before Hanamau Bay. The waves weren’t particularly strong so the jet of water from the blow hole was also pretty small.

Hanamau Bay is the recommended site for newbie snorkeling. It’s pretty picturesque with lots of fish and coral to see underwater.

The boys had a go on the snorkel set but only G1 followed me out to the coral. 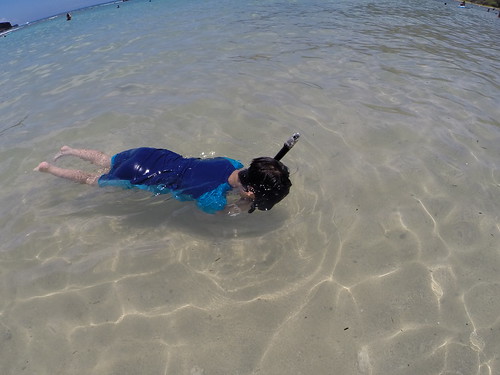 It was G1’s first snorkeling experience and we got to see some pretty interesting water flora and fauna. 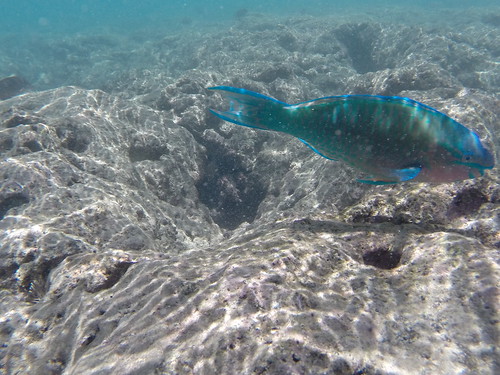 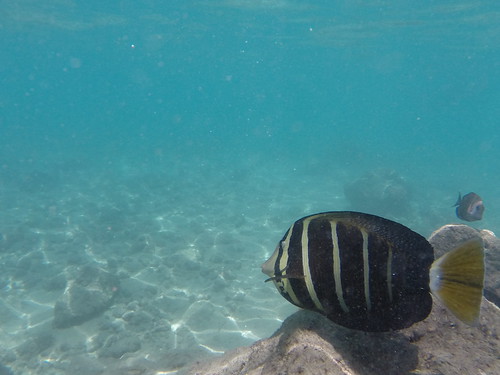 In retrospect, the Passport to Pearl Harbour was a little too much for one day. By the end of the day, the boys were wilted and ready to collapse from heat and exhaustion. There is a LOT to see and much of it under the unrelenting heat of the sun. Even I was exhausted by the time we were done around 3pm – I can’t imagine how the kids must have felt. 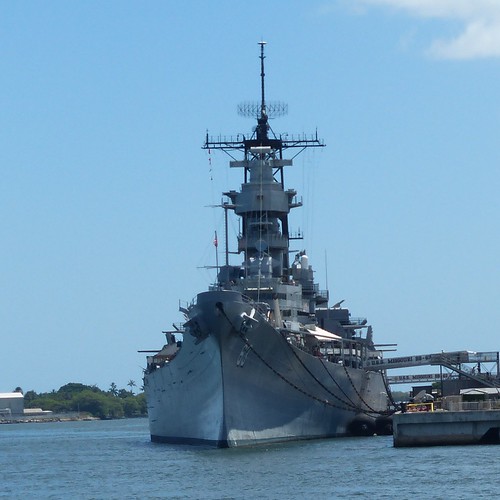 This was the first stop and probably one of the highlights of the tour. There was air-conditioning, the boys were still fresh and full of energy, and our guide was extremely informative about the historical significance and details of this ship. 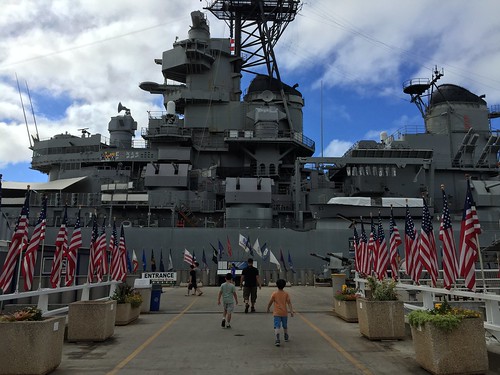 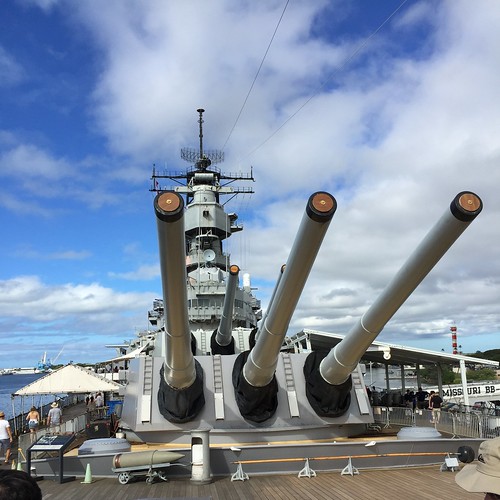 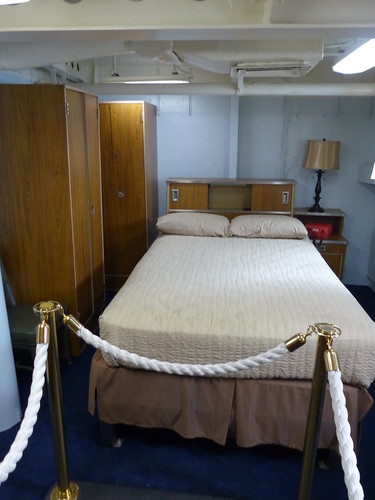 Meanwhile… in other parts of the ship, this is where the rest of the crew sleep: 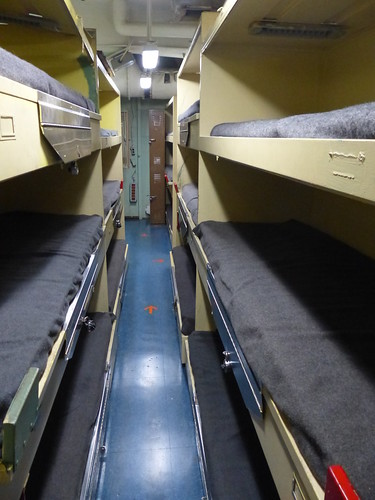 They also have a dental surgery! The equipment reminds me of the old Dental hospital in Melbourne. 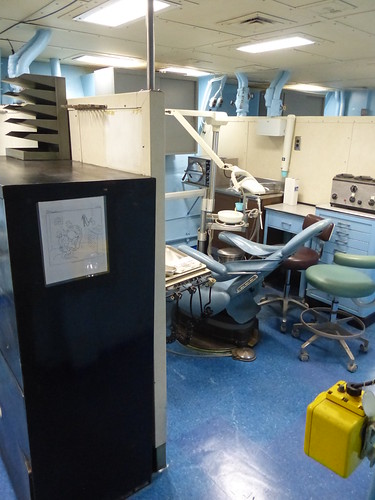 The signing of the documents that marked the end of World War II took place aboard the USS Missouri. 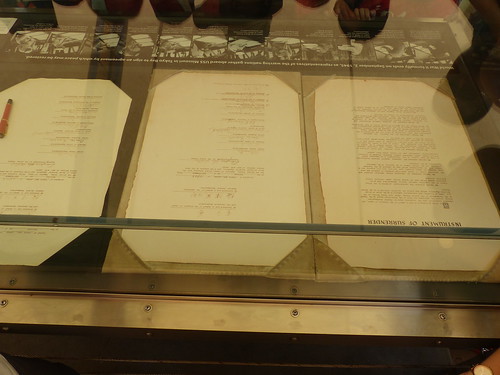 The hubby was probably more excited about this than the boys… 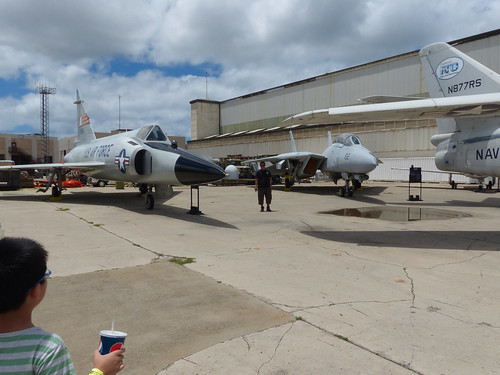 But G1 enjoyed the flight simulator: 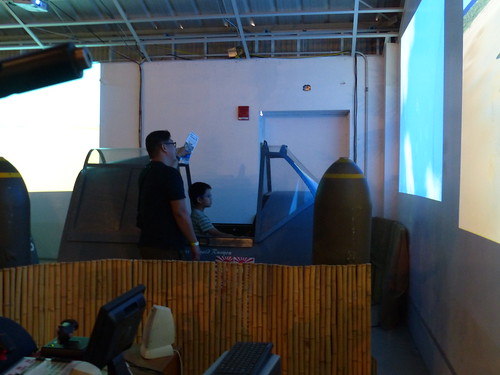 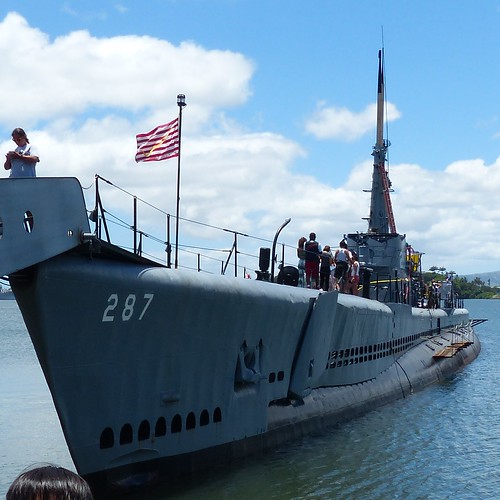 Extremely close quarters and not advisable for anyone with claustrophobia. There is no air conditioning either so the heat is stifling down there in the afternoon even with all the fans on. 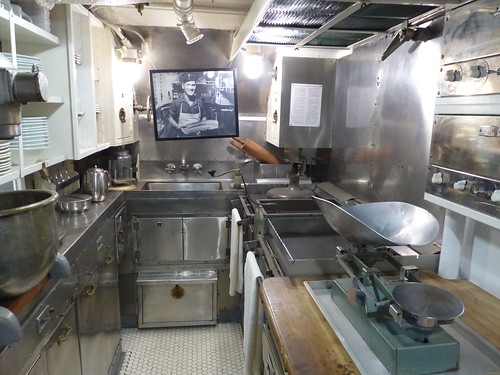 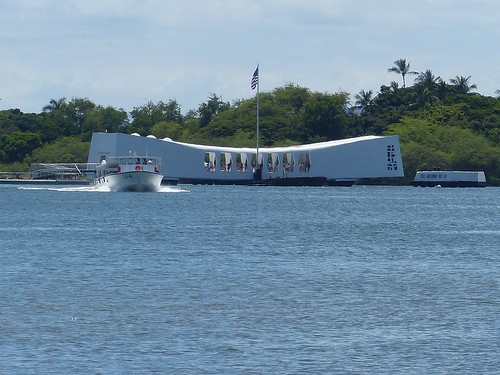 The USS Arizona tour begins with a movie at the visitor’s center. It is followed by a boat ride out to the floating memorial before returning to the visitor’s center by boat. G1 was invited to help steer the boat – his highlight for the whole day, I reckon. 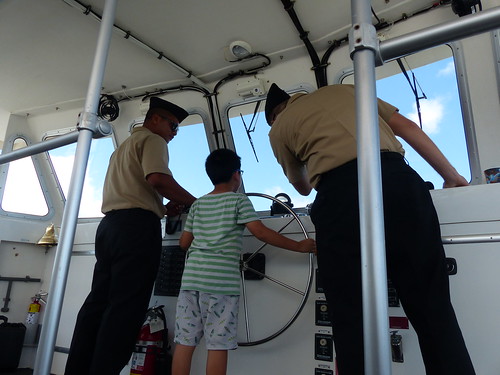 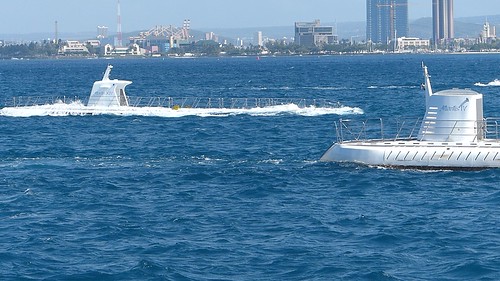 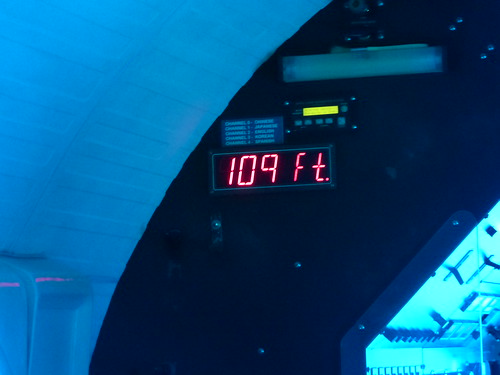 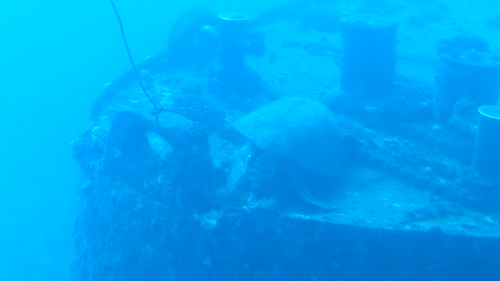 Our knowledgeable tour guide shared loads of information about Hawaii, the marine life, the history of the shipwrecks, and even the physics of being under water! All in all, an interesting underwater experience that G1 enjoyed but was lost on G2.

Just a short drive from the city, Nuuanu Pali lookout offers beautiful views of the island. It also sports some powerful winds that can hold you up even if you lean into it.

This was definitely one of the highlights of our trip – the boys had a blast running against the wind. You do need a bit of luck and good timing because the winds aren’t always blowing. When they do, however, it is quite an experience to remember. 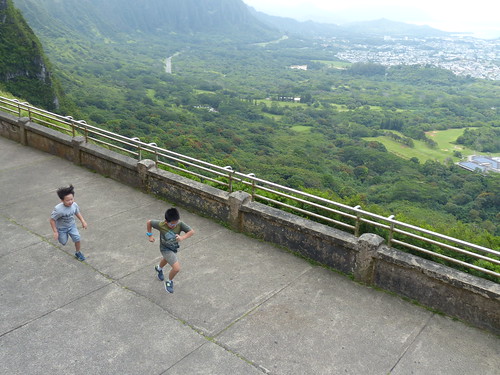 Located on the north-west part of Oahu, Laniakea Beach is a popular spot to observe the Green Sea Turtles that are natural to this part of the world. The best time to see the turtles is during summer when the sea is calmer and quieter. Unfortunately that also means you don’t get to the the giant waves that the North Shore is famous for. 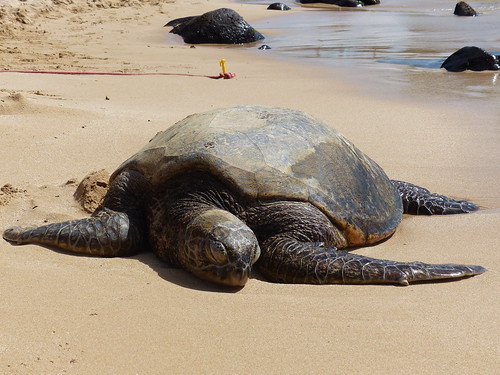 Even though Kilauea is said to be one of the most active volcanoes in the world, it’s still a bit of hit and miss whether we’re lucky enough to see fresh lava. As it turns out, Pele was smiling for us when we went… 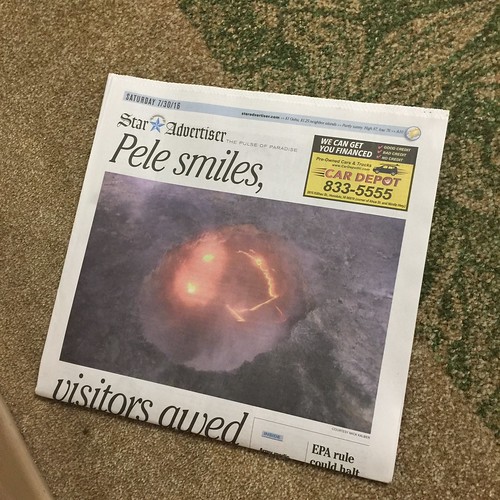 If I’d known we were going to be so lucky, I would have booked a helicopter tour in advance. As it turned out, they were solidly booked the days we were on the Big Island since everyone was hankering to see lava. These are the helicopter tour companies that offer volcano tours covering Kilauea:

By land, the lava can only be viewed from three points:

1. Jaggar Museum lookout – the easiest to get to but you need to be there at the right time and you need some high-power viewing lenses. We managed to get this shot with our DSLR on full magnification: 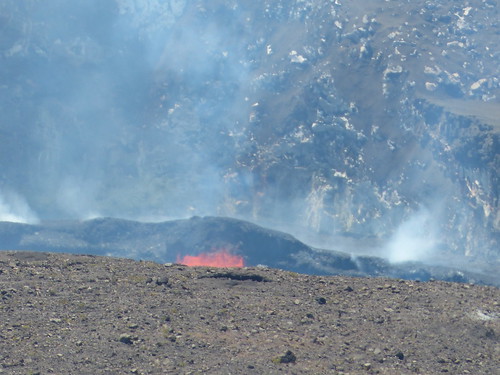 The other two options require a four-mile hike to the lava under some pretty harsh hiking conditions. The trail is completely exposed – there is no cover from the sun and the heat is compounded by the lava – and can take as long as 2 hours one way.

2. The end of the Chain of Craters Road Drive.

3. Kalapana Lava Viewing Area which is located at the end of Highway 130.

Hikers MUST be prepared. Carry about a gallon of water per person, bring snacks, wear sturdy closed-toe hiking shoes or boots, gloves to protect the hands from sharp lava rock. Wear sunblock, sunglasses and a hat. Plan to stay after dark? Bring a flashlight/headlamp with extra batteries. There is little or no cell phone reception in this area.

As a strong caution to visitors viewing the new ocean entry: there are additional significant hazards besides walking on uneven surfaces and around unstable, extremely steep sea cliffs. Venturing too close to an ocean entry exposes you to flying debris created by the explosive interaction between lava and water. Also, the new land created is unstable because it is built on unconsolidated lava fragments and sand. This loose material can easily be eroded away by surf causing the new land to become unsupported and slide into the sea. Finally, the interaction of lava with the ocean creates an acidic plume laden with fine volcanic particles that can irritate the skin, eyes, and lungs.

Lastly, a kind reminder to please be pono, and respect Hawaiian culture. Do not poke or prod the flowing lava, or throw rubbish and other items into flowing lava. Not only is it offensive, it’s illegal.

If you didn’t get any of those, there is some nice footage of the lava flow from Youtube:

Although we didn’t make the hike or the helicopter tour, there was still a lot to see along the Chain of Craters Drive: 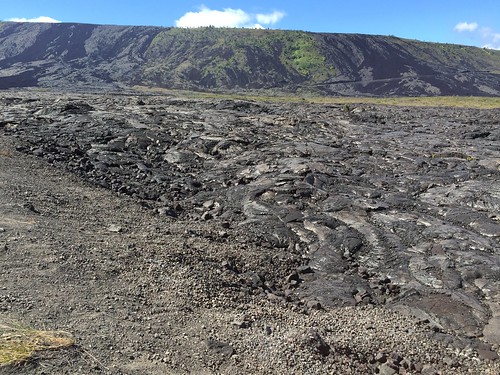 End of the Chain of Craters Drive

At the end of the Chain of Craters Drive is a lookout point where you can see lava rock formations, similar to the 12 Apostles, that have been shaped by the awesome power of the sea. 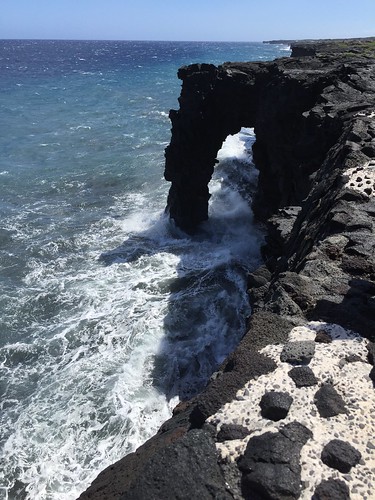 Rated as one of the most beautiful waterfalls in the world, Akaka Falls is an easy paved-walk to a beautiful site. Located 20 minutes by car from Hilo, it would be criminal not to make the trip out there. 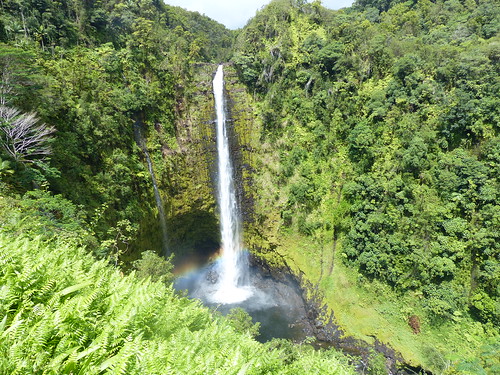 Just in case you’re wondering – no, you cannot swim in Akaka Falls. It seems a number of people wonder about it. There is no man-made access to the base of the falls which is located in a protected national park.

Open only on Saturdays, the KCC Farmer’s Market is strongly reminiscent of Fremantle Market. The fresh pineapples were a lovely treat but the coffee was hmmm… The boys enjoyed an ice treat from Ono Pops while we walked through the rest of the stores. 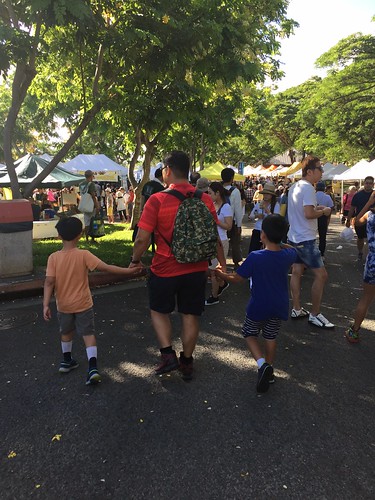 Apart from shopping, there’s not much else out there – food options are crap. Located quite near the airport, this outlet is quite far from the main attractions in Waikiki.

This is the largest shopping mall in Hawaii and it is about the get even larger (we saw extensions in the works while we were there). With over 300 stores in there, the walk from one end of the mall to the other is a workout in itself.