Some time back, when I was researching study techniques to improve student learning, I came across Daphne Bavelier’s research on how video games can make our brains work better:

Unfortunately, the research only showed these improvements with action video games, like Call of Duty, which can be rather violent. Violent video games may not be linked to criminal violence, but they are linked to increased aggression and decreased prosocial behaviour.

So I’ve been wondering if there were other games that could offer the same benefits without the violence when G2 brought Minions Rush to my attention. In a nutshell, Minions Rush is the Despicable Me version of Temple Run.

Minions Rush is set in Gru’s world and the levels incorporate scenes from the various Despicable Me movies, like Gru’s Lab, Gru’s Residential Area, El Macho’s Lair, Minion Beach, Super Silly Fun Land, Vector’s Fortress, and AVL Headquarters. You will also come up against familiar villains like Vector, El Macho, and the Villaintriloquist, including other villains that have been created for the game.

In Minions Rush, you have to run through the levels dodging obstacles while you commit despicable actions, collect bananas, and pick up power-ups. The pace of the game increases as the level progresses, requiring numerous split-second decisions to be made. The following video is a sample of what the gameplay looks like.

Quick thinking decisions are required as you decide whether you need to jump over an obstacle, roll under it, or move to the right/left of it. Controls involve swiping the screen up/down/left/right or tilting your device – depending on the task. As the levels get harder, the obstacles become trickier – boxing arms will push you into the path of an oncoming obstacle that you must be ready to dodge at the last minute; the perspective of your path will be warped, affecting your perception of the oncoming obstacles; or obstacles may be thrown into your path at the last moment.

While you’re busy dodging obstacles, you will also need to collect bananas and commit despicable minion acts (which basically means bumping other minions out of the way when you see them). There are also power-ups to be collected, such as:

But wait, there’s more… While you’re doing all this at top speed, you will also need to keep your level’s mission objective in mind, which may include any of the following:

Different missions will change the way you play each level because you will go after different items. Correct me if I’m wrong but that sounds like a good “working memory” exercise for children needing to practice keeping instructions in their head while they work on something else. As they play the game, it is easy for them to get distracted by the obstacles, the bananas, the other minions, and the power-ups. The motivation to keep the level objective in mind is so that they can advance to the next level. 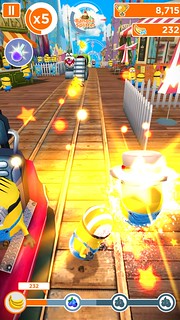 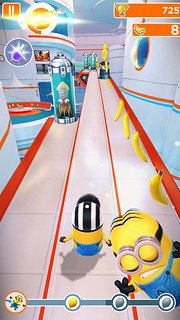 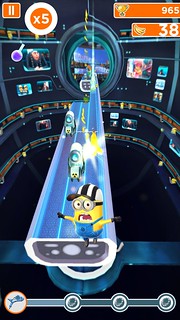 At a glance, it would seem that Minions Rush fulfills all the criteria of a rapid action video game required to improve our brains. We’re not the only ones who think so…

Learning Works for Kids recommends Minions Rush for children who need help with:

The Minions Rush gameplay is very similar to Temple Run which has been also been touted for its brain benefits:

I’d seen a ton of kids over the years who needed fine motor skill development, better hand-eye coordination and more accurate spatial skills.  And guess what?  ALL of those are in Temple Run.  With a healthy dose of problem solving skills thrown in for good measure. – Karen Mahon, educator.

Temple Run has also been likened to Atentiv – which is a technological solution being used to help children with ADD and ADHD. Preliminary trials for Atentiv have demonstrated an improvement of symptoms in 75% to 85% of affected kids. While the link is a bit of a stretch, it certainly sounds hopeful.

As Daphne Bavalier says – unless we take it in to a lab, we won’t know for sure. Regardless, it does offer a fairly harmless, fun pass time with potential benefits to boot. If my kids are going to waste their free time playing video games, I don’t mind betting on this one.