Some time back, we talked about the importance of vaccinations and how the benefits outweigh the risks but there was one aspect of vaccinations that we did not cover – herd immunity.

This is not a question that only affects us and our immediate families because the consequences of our choices can have far reaching and devastating effects. Doctors have said that when they ask some parents about vaccinating their children, they are told to “mind their own business”. One might agree that it is a parent’s right to choose whether or not to immunize their children if it weren’t for this factor called herd immunity (also referred to as community immunity).

What is Herd Immunity?

Herd immunity is a form of indirect protection from infectious disease that occurs when a large percentage of a population has become immune to an infection, thereby providing a measure of protection for individuals who are not immune. In a population in which a large number of individuals are immune, chains of infection are likely to be disrupted, which stops or slows the spread of disease. The greater the proportion of individuals in a community who are immune, the smaller the probability that those who are not immune will come into contact with an infectious individual. – Wikipedia

Below: The top box shows an outbreak in a community in which a few people are infected (red) and the rest are healthy but unimmunized (blue); the illness spreads freely through the population. The middle box shows a population where a small number have been immunized (yellow); those not immunized become infected while those immunized do not. In the bottom box, a large proportion of the population have been immunized; this prevents the illness from spreading significantly, including to unimmunized people.

So why should we care if our neighbours are immunizing their children? Because the benefit of herd immunity is that it provides protection to individuals who are not eligible for certain vaccines – such as infants, pregnant women, or immunocompromised individuals. It is these individuals that we need to protect through herd immunity.

Why do we need herd immunity?

There is a general belief that some vaccines, like the MMR, aren’t necessary because you can only get measles once and most people generally recover from it anyway. Once you get it, you’re protected for life – so why do we need this vaccine? Isn’t it better to get immunity from the disease itself?

How deadly is measles?

Also called rubeola, measles can be serious and even fatal for small children. While death rates have been falling worldwide as more children receive the measles vaccine, the disease still kills more than 100,000 people a year, most under the age of 5. – Mayo Clinic

Here’s the thing that a lot of people don’t know… Babies who contract measles never fully recover from it. They may appear to recover but the virus can find a way to hide in an infant’s immature immune system. As the children grow older, the virus grows stronger – it infects the brain, causes mood swings and behavioural problems, eventually leading to convulsions, coma and death. This deadly complication of measles is called SSPE (or subacute sclerosing panencehalitis) and there is no cure for it. If you have it, the only prognosis is death and the journey to the end is a horrible one – you only have to read the story of Ramon “Junior” Cortes in the Sunday Star to realise how bad it gets. 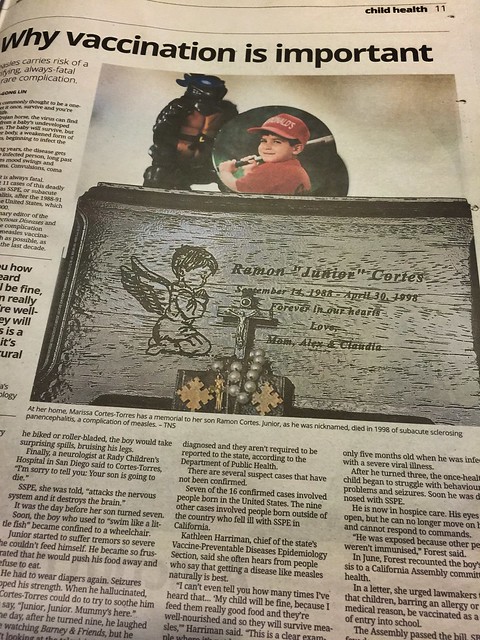 Ramon was 1 month old when he contracted measles. Although he seemed to recover from it by the time he was three months, the effects of SSPE began to surface when he was in kindergarten. He would stand when the teacher told him to sit. He struggled to add. At home, he would arbitrarily take clothes out of drawers. When he biked or rollerbladed, he would take surprising spills and bruise his legs.

By the time he was 7 years old, the boy who used to “swim like a little fish” became confined to a wheelchair. He started to suffer tremors so severe he couldn’t feed himself. He became so frustrated that he refused to eat. He had to wear diapers again. Seizures sapped his strength. When he hallucinated, all his mother could do was try to soothe him by telling him “Mummy’s here”.

One day, when he was 9 years old, he laughed while watching Barney & Friends – but he wasn’t looking at the television. His mother discovered he was blind. A month later, he took his last breath on his mother’s lap. – Fit for Life, The Star.

The people most vulnerable to SSPE are children under two years old because their immune system is still undeveloped. Since babies only get their first measles shot at 1 year, they are the ones most at risk of SSPE – especially if they live among a population where there is no herd immunity. And in order to get herd immunity for an airborne virus like measles, we need 95% of the population to be immunized – that’s pretty high. Given the fact that there any be any number of legitimate reasons why an individual might not be vaccinated (e.g. no access to the vaccine, too young to vaccinate, medically compromised, or the vaccine didn’t work), it is all the more reason why we need everyone in the community on board.

2 thoughts on “Why Should You Care Whether I Vaccinate My Child?”