I attended the PTCs with G1’s teachers recently and one of the areas he needed working on was his sportsmanship. G1 hates to lose which is nothing I didn’t already know, but apparently he takes it very poorly at school – now that I didn’t know. From the stories I’ve heard, he sounds like a John McEnroe – well, okay, maybe not quite that bad. When I asked for advice, his PE teacher suggested giving him more opportunities to handle “losing” when he plays games with us so that we can help him work through it.

Since board games provide lots of opportunities for winning and losing, I kicked off the Easter holidays with a game of Risk…

Risk – The Game of Global Domination

The hubs and I have fond memories of Risk so when we spied it selling in Hong Kong, we decided to get it (even though the recommended playing age is 10+). The game play is pretty simple – you are assigned several countries and you get to deploy troops to those countries. You have to attack neighbouring countries occupied by other players and conquer them. The winner is the person with the most territories when the cease fire card appears or the first one to conquer a set number of territories (the number depends on the how many players are playing the game). Part strategy, part luck, you’ll need your wits and your good fortunes to see you through to the end. 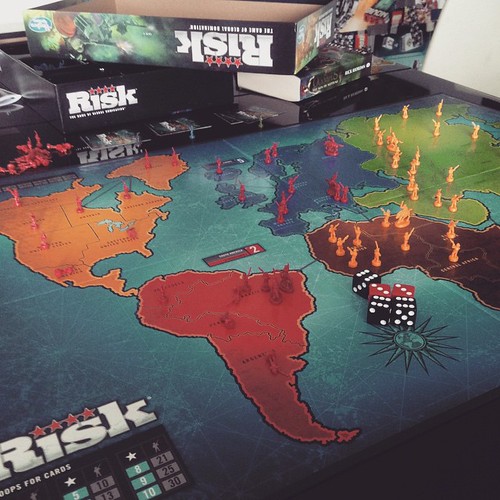 Ordinarily, I don’t mind if I win or lose against the kids so I don’t really try very hard. This time, I was desperate to make a point so I went after G1’s territories with everything I had – and nearly lost, too. I think the only thing I had going for me was game experience – which was G1’s eventual downfall.

I observed G1 closely throughout the whole game and I noticed that he tried his hardest when he felt he could still win. Once he thought he was losing, he grew “bored” with the game and wanted it to be over. Despite how he felt, he managed to keep his emotions in check throughout the game and never “lost it”. It made me wonder if he was actually listening when we talked about good sportsmanship recently or if he’s just mastered his game face with me.

There is a terrific video from Great Schools on How to teach your child about healthy competition that is very appropriate for children in the 3rd to 5th grade. Here are the take-home points:

See also: Teaching Your Child How to Lose: Good Sportsmanship