Recently read this hilarious post by Cilisos about the 9 Problems Faced by Bananas, but even as I was guffawing through it, I quickly sobered up with the awareness that my boys may be growing up like bananas, too.

Just in case you’re not familiar with the term, a banana is a reference for a Chinese person who can’t speak Chinese – because we’re yellow-skinned (as in Chinese), but “white” on the inside because we can only speak English.

I have always been terribly ashamed of my “banana” status. I try hard to fake my way through conversations with smiles and nods while I struggle to catch the one or two words that I can understand. When I get asked questions, I feel like I’m trying to work out the answer to a riddle. I loathe going to the market because it is one of those places where I’m bound to meet people who don’t speak English. Then I have to pretend I don’t have small change because I don’t know how much the item I’m buying costs.

Every Chinese New Year is extremely stressful because I have to visit relatives and practice my non-existent Chinese. Like today, I stood like a guppy gasping for air as I searched the rolodex in my head for the title of the aunt who had just greeted me. Usually, my tactic is to trail after my SIL like I’m her shadow and copy everything that she says. Today, I forgot that I was following my MIL and I echoed the wrong name.

Just to illustrate how complicated this gets, check this out:

And that’s just the aunts and uncles. There are also the cousins…

That’s just the greetings. The conversations are the hardest. Every Chinese New Year, I stand in ignorance, smiling and nodding to comments like “Wah! You’re so fat already!” Well, okay, so there are advantages to not knowing what they’re saying sometimes – makes it easier to take the verbal punches to the gut. Chinese relatives aren’t particularly famous for their diplomacy – they like to say it with no filters in place. The up side, I guess, is that you never have to figure out the double entendres because there are none.

It isn’t that I never tried to learn how to speak, but I do confess I didn’t try hard enough. The problem was that when I finally came to my senses that Chinese would be a good language to know, I was also old enough to be self-conscious about mispronunciations. Nobody I practiced my Cantonese on could ever understand a word I said so I kind of gave up in the end. Yes, pathetic.

Now that I have two boys, I’ve decided that there’s no way I’ll ever allow them to end up like me. So Mandarin? Compulsory. No ifs, no buts. As long as they can speak one dialect, no one can call them bananas and they’ll never have to feel the humiliation I go through over and over.

Unfortunately, I started a little late with G1 and by that time he had already decided he didn’t want to learn it. Not wanting to force it, I decided I would wait until he was older. When G2 came along, I tried to make amends. We weren’t doing too badly until G1 came along and influenced his brother. Then G2 was also clapping his ears whenever he heard Chinese being spoken. Gah!

Now that the boys are older and so hung up over the iPad, I asked the Mandarin teacher at school to recommend an app to help them reinforce their learning at school and this was what she suggested: Kids Learn Mandarin is a fun, educational game that will teach your child to speak, write and read over 200 Mandarin Chinese Words.

Produced in partnership by the Digital Learning Company and Fingerprint Digital, Kids Learn Mandarin is a comprehensive and curricular approach to kids’ Chinese learning, teaching over 240 Mandarin words through playful and progressive games and activities. Pei Pei the Panda hosts the language-learning adventure, which includes 9 fun and unique games like Turtle Hop, Balloon Pop and Shooting Hoops. Each game is designed to help children ages 2-8 achieve mastery over key Chinese vocabulary. Each lesson also features a Music Video, Chinese Character Writing Practice and a Playground that kids can decorate with Stickers they earn as they play.

All lessons are delivered in clear Mandarin with English narration and encouragement for your child. The trial program only contains “numbers”. The full programs includes:

How did it go?

G2’s already worked his way through numbers, colours and shapes. Today, he spontaneously translated some of the basic colours for me. For a child who previously wouldn’t talk about what he’d learned in Mandarin class, I suppose this is progress.

G1 was a little harder to convince but at least I have his commitment to work through the app.

The thing about learning a language is that you need to reinforce it with practice. If there’s no practice, there’s no retention. Since Mama’s absolutely hopeless, I’ll let them practice with this app. 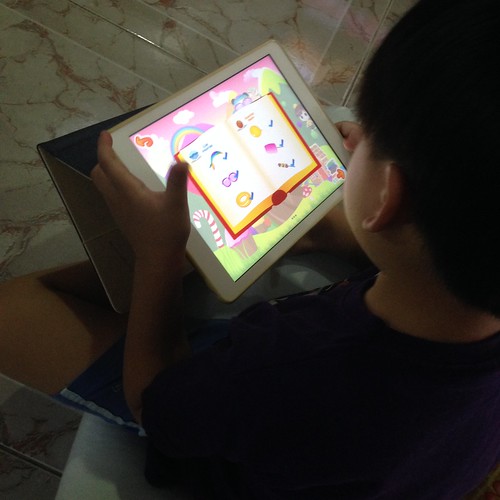