I have written about Carol Dweck’s work, growth mindsets and grit in previous posts, but I felt a need to revisit this topic after a recent event.

G1 was a precocious child and he often invited a lot “smart” praise. The biggest offenders were relatives who would praise him just for breathing. During a recent encounter when G1 was again praised for being “so smart and intelligent”, I found myself unable to hold my silence any longer and I expounded on the virtues of effort and the evils of “resting on our laurels”. I’m sure I must have appeared like a zealot warning the world of the coming damnation unless we changed our iniquitous ways.

When we got back to the car, I felt remorse that I had allowed my emotions to get the better of me. It is ignorance that invites such praise of being smart and intelligent, and perhaps if more people understood the nature of praise, they might start offering the right kind of praise. So rather than get angry and annoyed, I thought I should write about it instead. So here we are…

According to Angela Duckworth, the key to success is grit. And how do you teach children to get gritty? By helping them to develop a growth mindset.

It sounds almost too simple, or is it? You can read the differing perspectives over at NPR Ed for a more balanced view. My perspective comes from my own personal history and perhaps that is why I feel so strongly about this subject.

When I was growing up, I was supposedly a smart kid. I say “supposedly” because I was always told I was smart but I didn’t feel smart. Oh I did well at school and I was lavished with praise and it should have done wonders for my self-confidence but it didn’t. It just made me afraid. So afraid that when I was offered an opportunity to take higher level Math, I declined rather than take on the challenge because I didn’t think I could cope. It wasn’t the only opportunity I declined out of fear. There were many others and I regret them. The lesson I have learned from all these regrets is that I do not want my children to live like that – to decide they aren’t going to try something because they’re afraid they might fail. 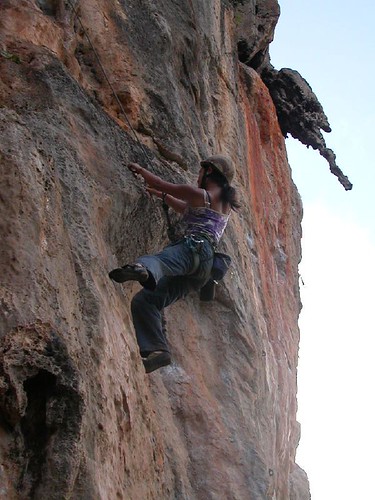 My first real lessons in grit didn’t come until I started rock climbing when I was 25 years old. In rock climbing, I discovered something that I really wanted although the funny thing was, I was actually pretty bad at it. Maybe that worked to my advantage because nobody was watching me and I finally had permission to fail without consequence. Through rock climbing, I learned a lot about effort, failure, and grit. I also learned a lot about fear and facing it. In fact, the years I spent on the rocks taught me a lot about character and who I am as a person and not just a smart kid.

Reflecting back on my rock climbing experience, I think that it is exactly the kind of experience children need so they can learn first hand about who they are, facing their fears, and staying strong in the face of failure. It doesn’t have to be discovered through rock climbing. Rock climbing was just the catalyst – it was my catalyst. The catalyst will be different for everyone – you just have to find out what it is for your child.

Do I think learning to be gritty helps children succeed? Hell yeah.

Carol Dweck – A Study on Praise and Mindsets

I first heard about Carol Dweck’s work on mindsets when I was learning about early childhood development. Reading what she had discovered through her research shed so much light on the experiences I had during my childhood. Everything made so much more sense and I wished I had known then what I know now about mindsets. Perhaps then I might have taken on more challenges and been less afraid to fail.

If you’re not familiar with Carol Dweck’s research, the following video shows what she did with a group of children.

In a nutshell, here’s what she did…

She took a group of children and gave them an easy test to work through.

Next, she gave all the children were given another test to work on. They were offered two choices – a harder test than the one they did, or an easier test.

Then all the children were given an impossible test – one that none of them could do well in.

Finally, she gave all the children an easy test – one that was the same level of difficulty as the first test they did before they were praised.

So now you know why I get antsy when my children are praised for being “so smart”! I understand the good intentions behind the praise, but if you really knew what it was doing to a child, I’m sure you would think twice about praising children for being smart.