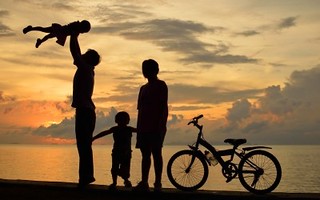 Love protects. It sounds cliche and feel good – almost like a Hollywood ending – but it’s true. When you break it all down, what is love but a series of chemical reactions in our brain?

It feels like I’m stating the obvious, but surely the point is still being lost when children are spending entire days either at school or in after school tuition classes. When I hear about teachers who have told parents that their child in Year 1 requires tuition classes, I am outraged.

I understand the desire to want to give our children the best start we can in life. I understand wanting to give them every opportunity to have an edge that might mean greater success in their future. But we must not lose sight of what is really important – the child. The whole child. And ensuring that our children grow up in a balanced and nurturing environment where they feel loved and secure.

And we’ve heard it over and over… how love protects and strengthens our children. Did I also mention that love makes them smarter?

At the end of World War II, orphaned babies were either sent to sterile hospitals with “stainless steel cots, in hygienic wards and getting 24-hour feeds of special infant milk formula from nurses in crisply starched, white uniform” or they were sent to “remote mountain villages where they were raised in the arms of the village women, surrounded by children, goats and dogs, and they drank goat’s milk and eventually ate from the communal stockpot”. When they went around to check on the infants, they found the ones in the villages thriving better than those cared for in the hospitals because they received more “love”.

Love is good for our immune system:

James Fallon was a neuroscientist who had all the genetic markers for aggression, violence and low empathy – all features of a psychopath. He also had the inclinations of a psychopath and he had a family history with seven alleged murderers. Yet, he turned out “okay” and he believes this was because he was raised in a loving family.

This is because a baby who feels secure and safe in the envelope of his parents’ love is free to divert attention away from the business of survival and focus fully on learning.

Why growing up in a loving home boosts children’s brains and makes them more intelligent:

And how do children depict love but as time that we spend with them.