G2 is generally quite reluctant to try new books so I usually borrow books written by his favourite authors. These book series have been very popular with him:

Since we’ve been through most of the books written by these authors (sometimes re-borrowing the same books), I thought it was time to move on to new titles. To encourage him, I’ve tried to find books on themes that he has shown interest in, such as halloween, monsters, pirates, dinosaurs and ninjas. Recently, after our stay in the Legoland Hotel, he seems to like all things related to Ancient Egypt as well.

Here Be Monsters appears to be quite a hit with both my boys. It’s a story about Captain Cut-Throat who doesn’t believe in monsters. He embarks on a journey to treasure island where legend has it that there are monsters in the mist. As his crew disappears one by one, will the good captain finally believe in monsters?

Written by Jonathan Emmett and illustrated by his wife Poly Bernatene, Here Be Monsters is written in delightful prose and is very enjoyable to read. It turns out that Jonathan is also an award winning author! Heh, my son has good taste in books… 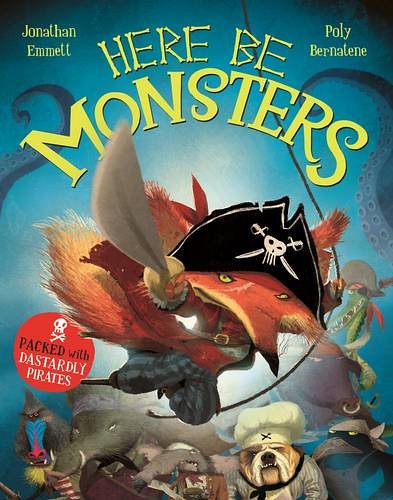 Jonathan Emmett has written quite a number of other books. His award winners were:

But I reckon G2 would probably prefer these ones: