G1 received a new Lego project from his grandfather recently. It’s called Lego Mindstorms. It’s kinda like Lego Technic with power functions but cooler because you can make all kinds of robots that the mind can conjure up. Even if you’re not ready for that, you can just follow the instructions and use the ready made programs to create one of the numerous robots they have in their database. Let me tell you how cool it is… 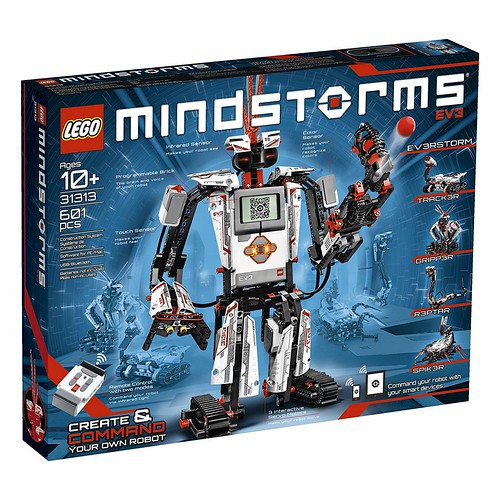 In a nutshell, the Lego Mindstorms kit allows children to experience the fun of building a robot without requiring a background in engineering or computer programming. The Lego Mindstorms EV3 is a flexible robotics kit that comes with sensors, motors, an electronic brain, and LEGO Technic components that your child can use to build any robot of his own imagination (I use “his” because I have two boys, but feel free to read it as “her” if you have a daughter). With Lego Mindstorms, your child can choose to take on challenging ready-made missions by following the building instructions for 5 robots or any of the robots developed by Lego Mindstorms fans; or create his own robot and share it with the Lego Mindstorms community.

Darren Wilson will tell you more about it in the following video series:

I can only tell you so much about it but the impact won’t be the same until you watch it in action, so here are some of the ready-made missions with accompanying pictures and videos.

Crawler-mounted, all-terrain Robot with a total of four cool, interchangeable tools: a bi-blade blender, a blasting bazooka, a gripping claw, and a heavy hammer.

Strikes at incredible, cobra-like speed with its fearsome fangs. G1 is currently working on this one and this is as far as he’s gotten. He’s got the motion going, but there are a few more kinks to be ironed out. 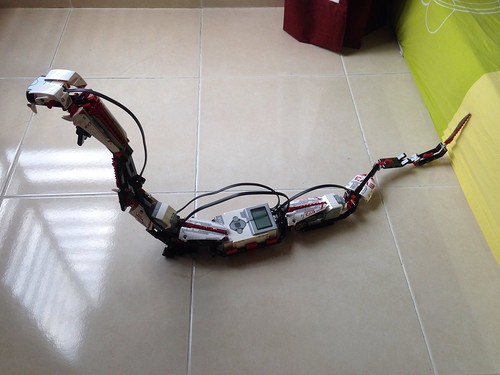 Six-legged creature with a lightning tail. Turns sharply and snaps with its crushing claw.

Leader of the LEGO® MINDSTORMS® Robots. Superior intellIgence and fighting power with his blasting bazooka and spinning tri-blade.

The muscle-Robot. Likes to lift heavy things with its solid build and powerful, grasping grippers.

This is what PC Mag had to say about it:

[The Lego Mindstorms EV3] robotics kit is faster, smarter, and more flexible than the previous version, and stands as one of the best ways to dabble in robotics without investing in tools. Its price tag might seem like a lot for a toy, but it’s much more than that; LEGO Mindstorms EV3 is a remarkably powerful and functional robotics kit people of any age can use to build some impressive and complicated projects.

If you want some further assistance, there are two Lego Mindstorms EV3 manuals you can purchase:

There are also centers that offer workshops if you want more guidance:

And if you’re really, really keen, you can follow the Carnegie Mellon Robotics Academy online program for Lego Mindstorms EV3.

One thought on “Introducing Robotics with Lego Mindstorms EV3”