We took the boys to celebrate Ah Mah’s birthday and Father’s Day at Gold Coast Morib. It was, um, quite a diametric experience. The boys, of course, loved it, although, I am inclined to question their objectivity since anything with water, beach, giant slides and sand evokes such emotive ecstacy that I doubt they could have had anything but a positive experience.

We stayed overnight at the resort and spent the first day at the water park and the second day on the beach. Since I was on life-guard duty at the Theme Park, I didn’t get any photos, so here’s one I found from a holiday site. This is a pretty good aerial shot of the entire water park:

As you can see, it is not a particularly large water theme park, but size matters not when you’re a child who can spend hours sliding down the same slides without ever tiring of it. Despite the masses that had flocked to the water park for a bit of splashing fun, the boys looked like they had found the secret passageway to heaven and patiently waited for their turns on the slides. Meanwhile, I struggled to stop myself from throwing up and adding my own contribution to the turbid water that was so cloudy with residue that I couldn’t see the steps to get out of the pool. All I could do was clamp my mouth shut, try not to accidentally swallow any of it and anticipate the illness that would surely befall the boys in the next couple of days.

Golden Sea Restaurant, just a stone’s throw from the resort, was not a bad place to eat. The meal was generally quite enjoyable and tasty, although I was ravenous by this point and probably would have been happy to eat anything remotely resembling food. The only disappointing dish was the chicken that looked like it was severely under nourished – the energy expended in removing what little meat there was on the bone would not have been replenished by the calories gained from consuming that chicken.

Yikee Seafood Bak Ku Teh (read a review here) which is about 10-15 minutes drive away. This one was really interesting. It’s a breakfast place operating from 6am – 11am, but you really need to get there earlier if you don’t want to miss out. I particularly enjoyed the Prawn Bak Kut Teh – although by the time we got there, there was no more “bak” left so it was just Prawn Teh.

With the beach virtually on our doorstep, it would have been criminal not to indulge the boys with a bit of sand play… 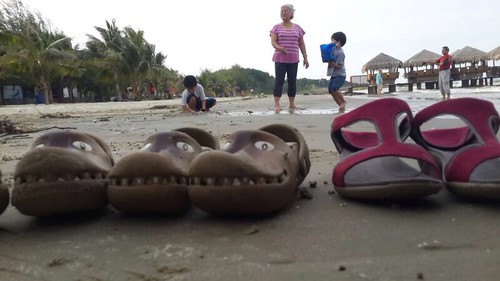 When the boys started playing in the sand, I remarked to DH that we only had one more set of clean clothes left for the boys. He confidently replied that once the boys were done with their sand play, we could just dust off the sand and they could put the same clothes they were wearing back on.

Yep. Right. Would that be after they start splashing around in the waves? 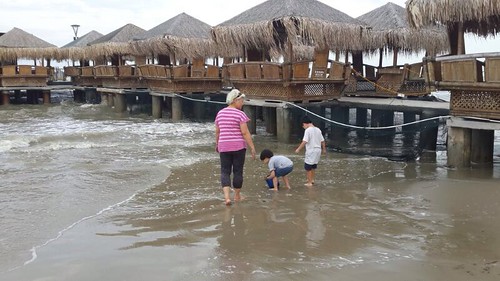 The boys had a blast and we got some “in” time together as an extended family. There was food to enjoy – dessert, too! – and the company was excellent. What more could anyone ask for?