And I’m still just as lazy so we’ve been on the prowl for new apps and games that are great right brain developers. With new iPhone and iPad apps being created everyday, it was only a matter of time before the repertoire of right brain apps increased. So here are some new ones we have added to our collection:

Okay, maybe this app falls under logic rather than right brain, nevertheless, it is a good brain development app.

If you’re trying to limit your child’s screen time, there is an equivalent board game version of Rush Hour by Think Fun.

There are many other variations to Parking Lot, like Unblock Me and Blocks. They have a partial “free” version available where you can play up to a certain level before you have to purchase access to the rest.

In this app, you are given a series of simple Mathematical problems that you are required to solve as quickly as you can. Personally, I think the Lumosity Raindrops game or Chalkboard Challenge is better but Brain Pusher can be an easier app for children who aren’t very strong with their Math and need more time to solve the problems. 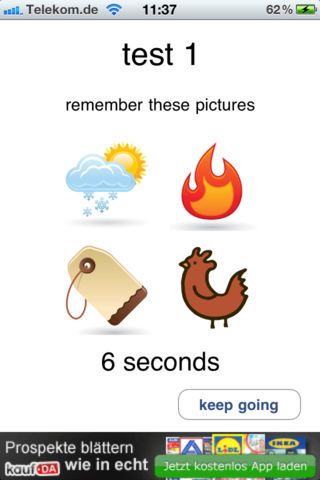 A series of four pictures are shown for a period of time and you are required to remember what they are and their relative positions to each other. In the following screen, you will be asked a question regarding the four pictures shown earlier and you will have four possible answers to choose from. It is a variation of the game Improve Your Memory which I wrote about in the first post on Right Brain Home Practice Activities for Lazy Moms.

Kind of like the card game “Memory” with different variations available.

This is a memory game that helps children develop their music knowledge and recognition of musical notes at the same time.

Test your logic, mind and memory skills, mental math, and more with Brainwell, one of the best app to train your brain daily and give it a challenging brain workout. Brainwell is a brain trainer for kids and adults based on advanced neuroscience and developed under the leadership of a team of experts in neuroscience and neuropsychology.