If you want to read the first chapter from the book Nuture Shock, you will find it summarised quite succinctly in the article The Inverse Power of Praise on the New York Magazine. It talks about the negative effects of praise on a child.  The essence of what Bronson and Merryman wrote is something I read about on Scientific American Mind about a year or so back.  I even wrote a follow-up post on how to counter the negative effects of “improper praise”. 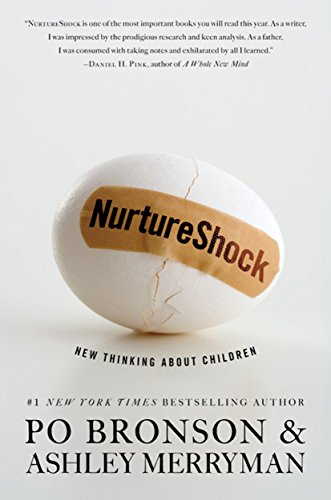 As parents, it is natural to feel proud of our children and their achievements.  We’re always on the lookout for things that they have done well and overeager to tell them how good they are at what they do.  Yet, in doing so, we are unwittingly placing pressure upon them to perform.  Children under such pressures feel that failure must be avoided at all cost less it reveal how “stupid” they really are.  So instead of trying harder tasks, they would rather avoid it and stick to the easy tasks where they are confident of performing well.

So what is the wrong way to praise a child?  To tell him that he is smart.  Such praise reinforces the message to the child that his intelligence is innate and finite.  That is, what he has is all he’ll ever have.  Things should come easily to him and when it doesn’t, it just means he isn’t smart.  He doesn’t believe he needs to work hard to achieve results and will avoid tasks that he isn’t confident with to avoid failure.

When I read this chapter, I felt myself identifying with it.  I was a child that was often praised for being intelligent.  I was the child that everyone thought was going to go places and achieve great things.  Instead of giving me confidence, such praises made me even more insecure.  Whenever I struggled with work or found myself having to exert more effort to complete tasks, I felt stupid – I felt like a fraud.  Somehow, I had convinced all these people I was smart when the fact was I wasn’t.

I feared tests of any kind.  Anything that could reveal that I wasn’t all that everyone believed me to be were things I avoided like the plague.  And when I got into Dentistry, I felt like the biggest fraud of all.  There I was surrounded by people who were really smart – brilliant, in fact – and I had somehow managed to sneak into this exclusive club.

The only time when I felt myself being free to excel was when nobody expected me to do well.  Like when I was rock climbing, I was under no illusions that I was in any way special or gifted at rock climbing.  I knew that the only way to climb well was to practice and work at it.  If I devoted the time to training, the results would begin to speak for themselves. When the efforts of my training came through, there was a certain satisfaction because I knew how hard I had worked for it.

So if you can’t praise a child for being smart or good at something, what can you do to help boost his confidence?  The key is to praise him for his efforts.  Praise should be specific and honest.  Never offer praise if you don’t mean it.  While a younger child might still believe you, an older child will be suspicious of the truth.  It is also important not o go over board with praise.  A child that hears praise too often gets so accustomed to it that he is no longer able to persist through difficult problems without it.

How Should We Praise Our Children?

In short, praise should be:

It’s not easy to switch focus on praise.  Even knowing all this, I still find myself struggling to find the right words to use when offering praise.  Inevitably, the wrong words do slip out from time to time.  Then there’s the problem of always wanting to praise.  Let’s face it, we’re parents and we’re extremely proud of our children.  It’s not hard to find “good points” to praise or to feel pride when we watch our children at work.  The key is learning to manage the praise appropriately so it is constructive rather than destructive.